A late afternoon in the Aegean contains joy and sorrow in such exact doses that in the end only the truth remains.
Odysseas Elytis, Little Nautilus

It is late in the afternoon. Daylight is dimming and sweet cool dew fills the air. It’s time for a “vegghera”… a habit that will soon fade due to the radical change in people’s lifestyles. At the time when the magic or “golden” hour begins, the sun is very low in the sky and creates a soft, diffused light, a sweet and warm glow that smooths out contrasts and creates soft, long shadows.

However, it is also the time to return home after a day’s toil, a time that marks the start of a break, of social contact, of games and of romantic dates…

“It’s the time which comes to life only in the summer: when the sun sets and the dilated day fades into the night. In the Cyclades we have a special word for visits, meetings with friends and relatives, dining on balconies and terraces. We veggherise” (Pournara, 2016).

Veggheras are meetings traditionally held in the neighbourhoods, on the sitting walls, or when it is cold inside the houses, and are common even today.
“In the summer we would go out on the sitting walls, that’s why there are sitting walls outside the village houses. The sitting wall is not a house, it is not anyone’s property, it is part of the street and was built for people to sit on and “veggherise” at night. They would sit there to pass the time. “If it was not dark yet, they would bring along their work, get their tools or continue their embroideries or mend the fishnets”, recalls Sophia Kefala.

In Marpissa, late in the afternoon, “men went to the coffee-house and the tavernas, and women took out the rags and sat with their neighbours to pass the evening. They chatted, discussed their news and each housewife would bring out whatever she had at home for everyone to share. They made yoghurt, rice pudding and other treats”.
Mrs Zafeira remembers “… they would ask my mum, – Marousaki, did you make any yoghurt?”

In the old days, these usually came about spontaneously after eating…
“The women would take along their knitwork and go to the neighbour to have a bit of a vegghera…”

Other times, these meetings were more formal and had the form of a scheduled visit that the village locals exchanged on weekends or holidays. Indeed, “they mainly visited those who had a prominent social position in the village, the doctor, the president and the most educated, because they had information about the banks, politics and everything else that interested them.”

In any case, the vegghera was an important and valuable moment in the locals’ everyday routine and social life. A typical story about veggheras is that of a lady who lived in the village in the 30s, who before visiting her friend made sure to send her a written notice of her upcoming visit, stating the following: God willing, weather permitting I will visit you in the afternoon, at six. Her friend lived right across the street!

Vegghera is the gathering (and passing time) of friends or neighbours held for company due to work (for night-time work). There, a lady may do some knitting, another may mend her husband’s pants, another may sort nuts, another may take the cotton out of its flower, while someone may mend his shoes. And whatever else can be done
in such hours and circumstances, over the long winter evenings (2005, p. 71).

Apospernia is the evening work carried out in company. Therefore, apospernia could also mean all the unnamed members of the company, the entire company gathered on these nights (2005, p. 36). 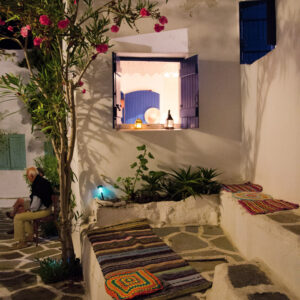 "In the Cyclades we have a special word for visits, meetings with friends and relatives, dining on balconies and terraces. We veggherise". Pournara, M. 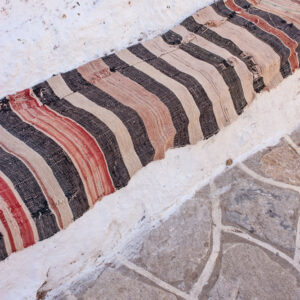 In Marpissa, late in the afternoon, women took out the rags and sat with their neighbours to pass the evening. 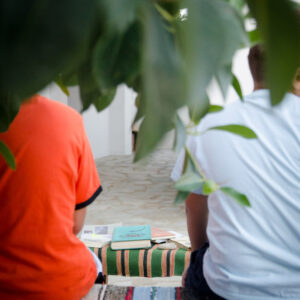 The sitting wall is not a house, it is not anyone's property, it is part of the street and was built for people to sit on and “veggherise” at night.